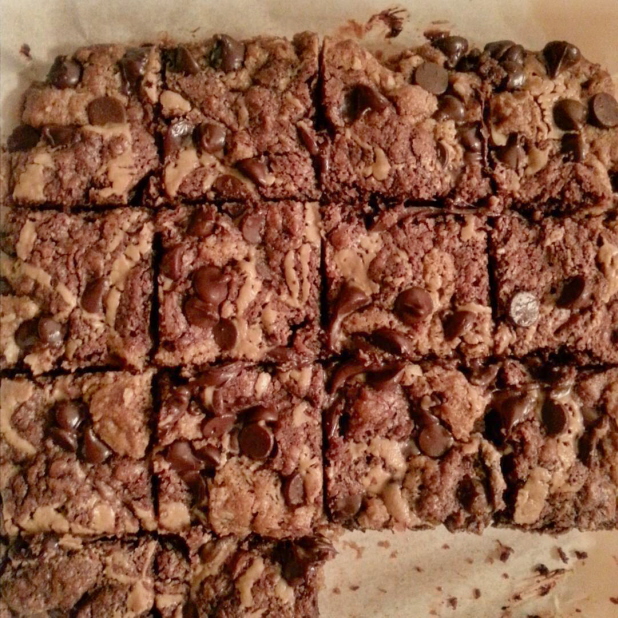 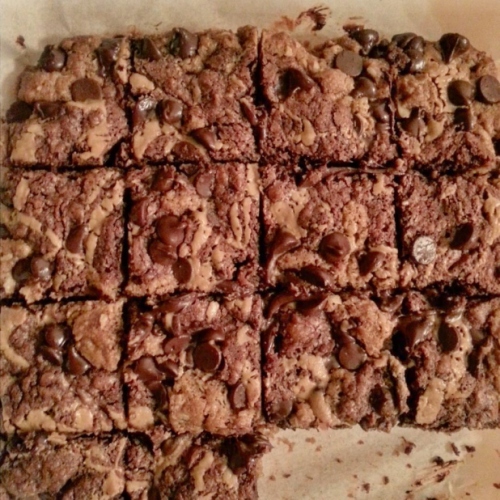 I had a plan. I was going to make a somewhat healthier dessert using oatmeal. But my bright idea began to flicker, as my cravings took over. I couldn’t shake the memory of that glorious Swedish Chocolate Brownie Cake. It had taken all my will not to bake another, along with random spoonfuls of peanut butter to distract me.

Finally, I concluded if I had to convince myself to make a dessert, it wasn’t worth having. So, I searched Pinterest for something that combined all three: peanut butter, oatmeal, and brownies. At first, all I saw were endless variations of peanut butter oatmeal cookies. I wanted to yell at Pinterest for not paying attention.

Then, I saw it – Oatmeal Chocolate Chunk Cookie Peanut Butter Swirled Brownies. The title was as insane as the recipe. A triple chocolate brownie (melted chocolate, cocoa, and chocolate chips), with peanut butter in the batter, is layered with chocolate chip oatmeal cookie dough, then swirled with more peanut butter, and topped with extra chocolate chips. This brownie had everything!

Now I keep a fairly well stocked pantry. Hence, I made a few changes so I could go ahead with what I had on hand. 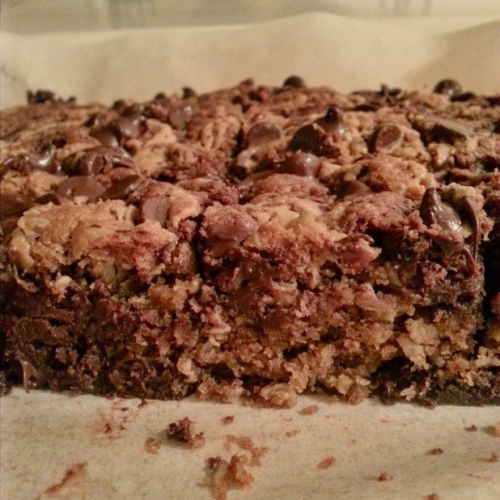 Generally speaking, the recipe wasn’t difficult. The brownie batter didn’t need a mixer, and the cookie part went quickly. Still, it took more than the advised 15 minutes to prepare; especially with assembly and the time spent trying to adhere chocolate chips to the oily oatmeal cookie dough. How fast do they really think a first timer is anyway?

Cutting the Oatmeal Chocolate Chip Cookie Peanut Butter Swirl Brownies made me more apprehensive. The knife resisted along its crusty edges. Since a corner piece dangled, I went for it. The oatmeal cookie part was too crunchy for my taste, and I didn’t care for the dough. But the brownie layers had potential.

I took another slice. This one had an almost even distribution of brownie and oatmeal cookie. Though the cookie part was softer, I still wasn’t feeling its crumbly consistency, and it was a bit oily, probably from the vegetable oil substitution. Yet, the brownie was moist, chocolaty, with a mild peanut butter flavor. That, I enjoyed.

After a third piece and much deliberation, I deadlocked for the rating; 3.5 stars was too low and 4 stars was too high. So I’m breaking my rule and going with 3.75 stars for these Oatmeal Chocolate Chip Cookie Peanut Butter Swirl Brownies. For the effort, it wasn’t worth the payoff. I do realize using the recommended oil might have improved the oatmeal layer some. Having it closer to real oatmeal cookie dough would’ve been even better.

If you’re curious, and want to give it a try, please visit Half Baked Harvest for the full recipe. Perhaps you’ll appreciate it more.